First introduced in .hack//G.U., the language of The World is the common language employed within the game world for all living creatures to communicate with each other, the only exception being monsters. This language is visible in the engravings of some weapons, in some of the game textures, and is also present in the majority of the vocal songs made for the .hack series.

The writing system for The World's language is composed by a total of 29 characters: 26 characters equivalent to the ones from the Roman alphabet, and three special characters used to denote whether the word they are part of is used to refer to oneself, to another person or to the world at large.

The glyphs made for the alphabet with the pronunciation they each have can be seen in the following table:

The language is written from left to right and from up to down, and it has two possible ways in which it can be written: 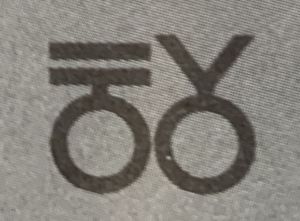 Strictly speaking, the The World language is a cipher for English, with the peculiarity that when the language is spoken, it does not say the words as a whole, but instead it spells them out using the phonetics outlined for each letter in the table indicated above. Therefore, it can be concluded that it shares the same grammar and vocabulary as English, but it does not share its phonology. Even so, there are sometimes when the spelling order is changed for the sake of pronunciation, such as when "exposed" is instead spelled as "xeposed" or "without" is instead spelled as "iwthout".