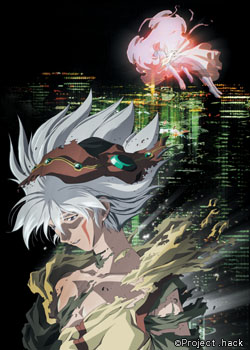 .hack//SIGN is an anime television series that aired in the Spring 2002 season.[1] 26 episodes were aired on television, while three additional episodes were released on DVD. It is the first anime released for the .hack series and was timed to release around the same time as the Games Quadrilogy as an introduction to the setting of project .hack.

.hack//SIGN was directed by Koichi Mashimo, the founder and CEO of Bee Train, the studio which produced the anime.[2] He also did Editing (off-line), screenplay, script, story board, and sound director work for .hack//SIGN. Bee Train also produced the Liminality, Gift, Dusk, and Roots anime. The score was composed by Yuki Kajiura. This was the second time she worked with Mashimo, after doing the score for Noir. She went on to do music for other Bee Train titles, including other .hack titles (Liminality OST, Opening theme for Roots and Ending theme for DUSK) as well as the "Girls with Guns" trilogy, made up of Noir, Madlax and El Cazador de la Bruja.