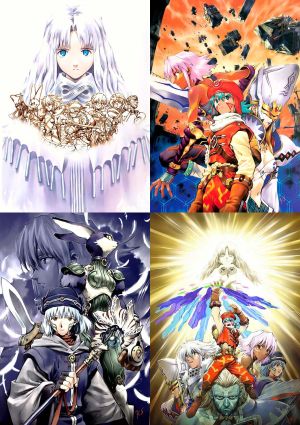 The .hack// Games Tetralogy are a set of four Action RPG games released for PlayStation 2. The collection of games are sometimes referred to as a Tetralogy or Quadrilogy. Fans also use the abbreviation "IMOQ," taking the first letter in each consecutive game's western title in order (Infection, Mutation, Outbreak, Quarantine). Each game came packaged with a bonus DVD of the OVA .hack//Liminality, which shows offline events occurring concurrent to the events in-game. The games are set in the "first season" of the .hack series, taking place after SIGN and ZERO. Several other media retell the events of the games, including .hack//Another Birth, .hack//XXXX, New Novelization [.hack] and .hack//Link. The games are followed by Legend of the Twilight manga.


The four games take place in a "game within a game," the fictitious MMORPG called 「The World」. The story explores how events in the simulated online game impact the offline world. Players take the role of Kite, a player character who acquired abilities that surpass the system as he seek answers to various strange occurrences that are tied to the game. The core gameplay simulates a Desktop where players can read e-mails, chat on forums, and play The World. While playing The World, players can form parties with other players, delve dungeons and participate in events. The BBS, Email and News on the desktop update over time as the planer progresses in The World. The BBS and email can help players access more areas as the story moves forward.


The games were developed by CyberConnect2, Co., Ltd. and Published by Bandai. Initially released in Japan between June 20, 2002 and April 10, 2003, the games went on to be translated for North America, Korea, and Europe and Australia in 2002-2004. Project .hack was designed to be a multimedia project, with manga and anime released before the games the introduce audiences to the setting and establish the overarching mystery of the storyline.

The story follows protagonist Kite, who was invited to play the MMORPG 「The World」 by his friend from school who plays a character named Orca. After a chance encounter with a monster pursuing a girl clad in white, Orca is defeated and Kite narrowly escapes with his life. Kite's computer crashes because of the encounter, leaving him bewildered by the turn of events. Kite then discovers that Orca's player fell into a coma after the incident. Kite's player decides to continue playing 「The World」 in the hopes of finding the answer of why his friend is hospitalized.