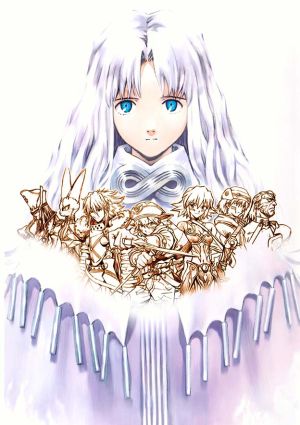 .hack//INFECTION is the first entry in the Games Tetralogy released for PlayStation 2. Infection and the other games take place within the fictitious MMORPG called 「The World」. Infection came packaged with a bonus DVD of the OVA .hack//Liminality, "Liminality: In the Case of Mai Minase," which shows offline events occurring relatively concurrent with the events in-game. The events in Infection are followed by Mutation.

Transcript of Game Events: Infection Transcript
The story follows protagonist Kite, who was invited to play the game 「The World」 by his friend Yasuhiko, who is known as Orca in the game. After a chance encounter with a monster chasing after mysterious girl in white, Orca is defeated and Kite narrowly avoids the same fate. Kite's computer crashes because of the incident, leaving him bewildered by the turn of events. Kite then discovers that Yasuhiko was rendered comatose after the incident. Kite's player decides to continue playing The World in the hopes of finding answers as to why his friend is now hospitalized.
Kite turns to the BBS to see if any other players may know about the bizarre incident, but his message is quickly removed. He also receives mysterious e-mails, some which aim to help while others contain thinly veiled threats.
While in The World Kite meets and teams up with BlackRose, a newbie who has her own reasons for pursuing the truth. Before Kite can learn more of her circumstances, they are attacked by a Data Bug. Balmung appears to warn them to stay away from the monster before witnessing Kite use Data Drain for the first time. Balmung mistakenly believes that Kite is behind the corruption of data and threatens him before leaving. A mysterious woman who has been seen watching over Kite mocks Balmung for his assumptions, informing him that Kite was a friend of his partner, Orca.

Main articles: In the Case of Mai Minase

Infection is set exclusively on the computer belonging to Kite's player character. When the game starts, it simulates booting into Altimit OS, where the player can access their desktop and log into The World.

The desktop features a reader for emails, world news, and a video player to rewatch cutscenes. The player can customize their desktop wallpaper and background music. Wallpapers, music, and cutscenes can be unlocked through game progress, which is tracked via the Books of Ryu.

Throughout the game, the player receive messages from other players and system update information from CyberConnect, the developer of The World.

The game is shown entirely through the player's desktop so world building is done through reading World News. References to events in The World can be connected to events offline and the repercussions of the game's instability can be seen to gradually increase in severity.

The World is the game within the game of .hack//INFECTION. It is a simulated MMORPG that allows players to enjoy a sandbox experience in which players choose how they wish to play the game on an individual level. There is no overarching goal for players to pursue outside of escapism and staving off boredom.

When players access The World's application, they can read messages from other players in the community forum known as the BBS, or Bulletin Board System. The board posts can expand the amount of areas Kite can access as well as unlock events and plot progression.

Initially, the Korean release of Infection was planned for October 15, 2003, but was postponed to October 22. 2003 to meet a higher standard of quality. While the game has Hangul subtitles for Japanese and English audio, Liminality was dubbed for a Korean audience as well as having subtitles.

The PAL version starts with a language select screen and Loading screen after choosing a language, before opening the Main Menu. The language selection determines the subtitle and written language. The game starts with English audio by default and cannot be changed to Japanese audio until it is unlocked when the game is beaten. Once unlocked, players can continue onto MUTATION and the other games with Japanese audio. All other versions of the game (Japanese, US/CAN, Korea) have audio and subtitle options under the "Options" menu.

The Japanese, US, PAL English, and Korean versions use the same stylized word choice for the Main Menu buttons. The other PAL languages translate the words into their respective languages, uses cramped tracking[7], and spaces between words.

‡ PAL Version's Japanese audio is not available until completing the game.

The Japanese title of this volume is 感染拡大, the Hepburn romanization of which is Kansen Kakudai, lit. "Infection Expansion" or "Spread of Infection," using language evocative of both computer viruses and infectious diseases found in nature.

The US and PAL title is the word INFECTION, stylized in all caps. Unlike the Japanese and Korean release, which uses "Vol. 1" (i.e.,"Volume 1") to delineate the order of the games, the US and PAL releases use the word "Part 1."