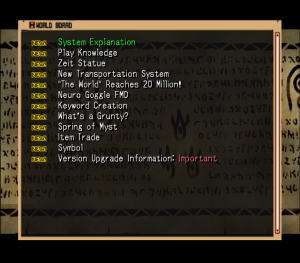 The BBS, or Bulletin Board System is a forum accessed by opening The World application from the desktop. Before logging into the game, players can check threads for news, events, or rumors. By reading BBS posts, it is possible to unlock new keywords for the Chaos Gate. As players progress through the game, new thread posts will appear over time. 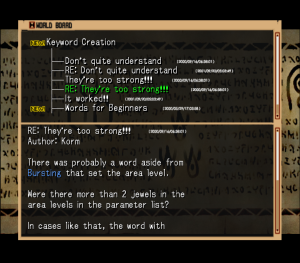 Each post has a Thread title, post title, username, and timestamp. Each timestamp is randomly assigned from 6 possible dates/times. When the games were originally released in 2002 most people playing the game would have done so on a CRT screen, which makes it difficult to accurately read the dates. Playing using an emulator on modern hardware makes it possible to make out the numbers.
The timestamps were most likely not intended to be read by players and do not bear significance to the plot or gameplay. These timestamps do not correspond with any known development milestones for CyberConnect2. Some posts are made chronologically out of order, with response posts predating the original post it was responding to. The Games Tetralogy takes place in an alternate history set in the then "future" of 2010, meaning these timestamps also do not match up with the timeline of canon events. Despite this, the dates have been included with their respective posts for posterity.


The timestamps are formatted from largest to smallest unit of time measurement; YYYY/MM/DD:hh:mm:ss, where YYYY is year, MM is month, DD is day, hh is hour, mm is minutes, and ss is seconds.
The dates are stored as an image in the game files, limiting the range of dates to the following six possibilities:[1]