((make navbox to return to IMOQ_News))

This page contains transcripts of the News articles encountered in Infection


Transportation Control
System (RTCS) ended its
trial period today, and will
be fully operational
starting tomorrow. It is predicted that
chronic traffic jams will be resolved by this
system.


This system's main feature is the ability to
control and adjust traffic lights depending
on the situation. It can also predict the best
timing at railway stops. When there is a
crime, it will turn all traffic lights around the
area to red to help prevent the culprit from
escaping. Of course, it is questionable
whether criminals will follow the traffic laws.

Sales of the online role playing game,
"The World" (CC Corporation, December, 2007)
have exceeded twenty million copies
worldwide. The game was the first online
game released since the "Twilight of the
New Gods" incident. It sold ten million
copies in its first six months and has
steadily grown in its sales through various
upgrades.

Reports state there are around ten million
users in Japan alone. CC Corporation in
its press release stated, "We are grateful
for the support, but also feel there is a
social obligation that we must meet."

According to a source within CC Corporation,
they are considering a submission to the
Guinness Book of World Records as the
"Highest Selling Game in History."

SONES announced that it will soon sell a
new head-mounted video display, the
"Neuro Goggle FMD." It is customized for
the popular CC Corporation game, "The
World." Retail Price has not yet been set. 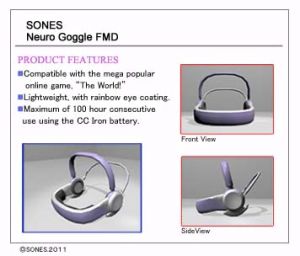 The sound recognition
device has evolved to
near perfection with a less
than 0.5% error rate.
When switched to Chat
Mode, it recognize the pauses by the
speaker and translates them as "...." The
day may come when keyboards are
obsolete.

The World Network Council (WNC)
announced today that the market
penetration of the network OS "ALTIMIT"
has reached almost 100% around the globe.
This means that all networked computer
terminals in homes or businesses are now
compatible with ALTIMIT.

WNC Public Relations stated that the
"Pluto Kiss" incident of December 2005 and
the two year period following the incident
commonly known as "Twilight of the New
Gods," is now only a page in history.

Some officials state that after six emotional
years of ups and downs, the "New
Generation Hyper Net Plan" proposed in
April of 2004, has finally been fulfilled.